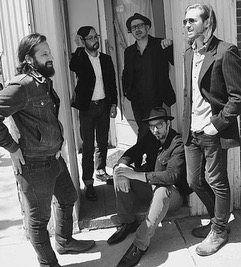 The rock band Hollis Brown is named after a Bob Dylan song, "The Ballad of Hollis Brown." The band was formed by lead vocalist and guitarist Mike Montali and lead guitarist Jonathan Bonilla. The two are both second generation immigrants, and began their musical journey adding drummer Andrew Zehnal, keyboardist and vocalist Adam Bock, with bassist Brian Courage rounding out the band.

The band's current single, "Run Right To You," has been playing since it's release in October 2016 and has been gaining incredible attention since. The band's EP, Cluster of Pearls, was chosen as one of the 300 select releases throughout the world for Record Store Day 2016. Cluster of Pearl'sis the band's follow-up to their third album release 3 Shots, featuring the Bo Diddley collaboration "Rain Dance" and the duet "Highway 1" with acclaimed alt-country singer, Nikki Lane.

The band will be touring throughout the U.S. this summer with stops at Mountain Jam, Karoondinha Festival, among others. The band has previously toured extensively and will be performing a set at the Decatur Arts Festival in Atlanta, GA Saturday, May 27.

Featuring their single "Run Right To You," the band tells AXS that "this is one of the first songs we started writing as a band. We had to wait A LONG time, and fight really hard to get this song not only made, but released! Took a few different versions, many re-writes lyrically, and it really showed me that as a writer you shouldn't give up on your songs. This wasn't an easy one, but at the end of the day it's probably my favorite song that we have done together! " With the positive critic and fan response, it seems the delayed release was definitely worth the wait.

Be sure to listen to the single in the Spotify player below. For more information on their performance at Decatur Arts Festival, click here. Full tour and festival dates can be found here.