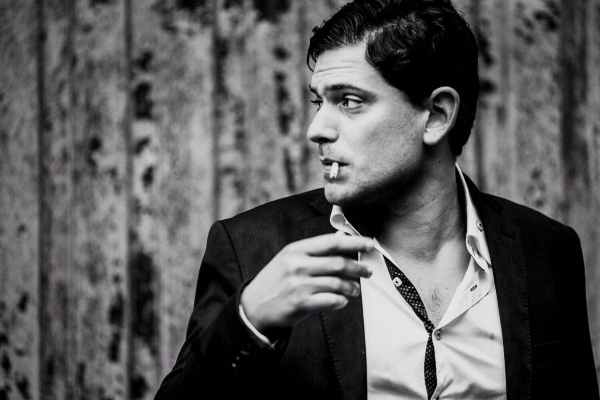 Someone needs to give a call over to Director Jim Jarmusch, because I do believe I’ve found the soundtrack to his next film, courtesy of Luke Elliot.

This New Jersey born and bred singer/songwriter has released his debut full-length album, Dressed for the Occasion, on August 18 through Jullian Records. The album was produced by John Agnello, known for his work with Kurt Vile, Sonic Youth and Dinosaur Jr. among many others. The album features the single, “Get ‘Em While They’re Hot,” a new version of the acclaimed song from his first critically praised EP, Death of a Widow, which No Depression called “a superb debut.”

Elliot’s penchant for storytelling and fascination with topics a bit out-of-the norm is front-and-center on the debut album, and match the songwriter’s rather unique trajectory. Signing with former Rihanna manager Christa Shaub lead to a chance meeting with an influential Norwegian journalist that would send his career on the fast-track. Elliot was soon signed to Norway’s Indie Recordings, which released Dressed for the Occasion in 2016 throughout Europe. The album quickly made it to  #7 Norway’s iTunes chart.  When asked about the influence behind his writing process Elliot said. “If I’m being honest with myself, I couldn’t tell you truthfully where inspiration comes from.  I’ve always considered myself more of an editor than a creator.  I don’t feel responsible for whatever comes through me; it’s beyond my scope or control.  The more I’m willing to edit, the more material seems to flow through though.  The harder I’m willing to work, the more work I get.”

Though he’d never been out of the country – or even owned a passport – Elliot found himself spending a whirlwind two years in Europe, embarking on sold-out tours, performing to thousands of new fans, appearing on major TV shows, and drawing the praise of the European press. Germany’s version of Rolling Stone wrote, “Luke Elliot’s style is timeless, his songs tell stories and comparisons to Leonard Cohen, Bob Dylan, or Tom Waits are therefore not uncommon.”

This fall, Elliot will be touring in support of the US release of DRESSED FOR THE OCCASION.