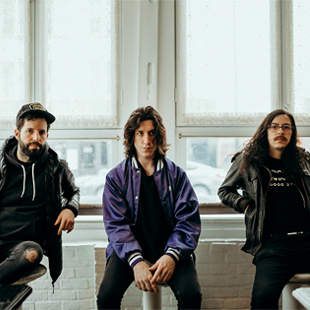 Chicago melodic rock band The Kickback knows how to write a catchy pop song, even through the pain and heartbreak of divorce. Their sophomore album Weddings and Funerals just dropped Friday, and is almost entirely about the end of frontman Billy Yost’s marriage.

A universal, relatable breakup album for sure, but this is not sad bastard music like Elliott Smith or Bon Iver. If you don’t listen to the lyrics, the upbeat tone could seem almost the opposite. It starts off loud and fast and doesn’t let up for 32 minutes.

In late 2009, Yost moved to Chicago from his home town of Beresford, South Dakota. He made the move for a girl, whom he ended up marrying. Fast-forward a few years and divorce was imminent.

They’d met at the University of South Dakota when he was a 19-year-old freshman and she was a junior. “We were together for about 10 years and married for the last three,” he recalls. “The band was just gone all the time and dictated our ability to really do much of anything. I don’t fault her for leaving. I was just so blindly in love while not being able to understand how hard it was for her to prop us both up for so long.”

This past December, The Kickback traveled to Los Angeles to record Weddings and Funerals with multi-Grammy-winning producer/songwriter Dennis Herring (Elvis Costello, Animal Collective, The Walkmen, Ben Folds) at DTLA Recording, an expansive open space in the historic Arts District that Yost believes used to be an illegal marijuana grow house.

“It’s a very non-traditional studio,” says Yost. “It’s giant, it’s open-air. There are these big garage doors that are up most of the time unless you’re recording really loud stuff. The ceilings are probably 30-feet. It’s just this big room. Everybody’s just in the same room at all times. If you’re not the one recording stuff, you’re still in the middle of everything, which was a really cool way to make a record. You always knew what was going on.”

So the band arrived at the studio with a handful of partially written songs and got to work. “Our first record, we went in with every part completely written and ready to put on tape. But for this record, we showed up in LA with the verses and choruses and bridges but no idea of how everything was gonna come together,” he says. “That was scary, but it was also weirdly kind of freeing.”

Herring had a hand in helping the songs take shape. “It was good to work with someone who’s as bull-headed as we are,” says Yost. “We were hoping we could work with someone who would fight for songs, and Dennis was definitely that guy. He said, ‘When you’re recording, your feelings don’t really matter.’ He just wanted the songs to be good.”

“Dennis had a song-by-song approach, which I liked,” says Yost. “It takes longer, but Dennis works a little chaotically. At any given moment you weren’t sure if you were gonna spend the whole day reading a magazine, or if you needed to be ready to record drums on a song that had been reworked five times already and you weren’t really sure what the part was.”

“Especially for the other guys. I think it was 30 days of having to be on your toes at any possible moment, which I think was a little stressful for everybody, but it’s the way Dennis works.”

Despite his powerful singing voice and energetic promo videos, Yost is soft-spoken over the phone today. But he’s also super hilarious. Never once laughing at his own jokes, he delivers anecdotes and one-liners with a deadpan even tone.

“Dennis is kind of like that guy where they did that experiment where they would give a kid one donut now, or if they could wait, they’d give them two donuts an hour from now. That’s kind of how the workflow wound up working.”

The first track of the album, Will T, was also the first single they released. Will T starts off with a “La-ha-ha-ha” hook Yost describes as “the obnoxious one.” The track sounds like it just as well could have come from now-defunct Philly rock band Free Energy, if Free Energy had swapped the cowbell for sleigh bells and lasted long enough to suffer the demise of a wedded union.

“It’s the kind of hook where if you don’t like that song, you’re gonna fucking hate that song, and I get that,” he says. ”It’s one of those hooks that you wake up with in your head and wind up beating yourself over the head with a frying pan trying to get out.”

He started playing with the verses of Will T in college when he was 18, writing about “being scared of always eventually being disappointed in a relationship.” He put the song away for several years until it crept back in during his divorce. “We stuck that scary laughing chorus with it because the whole song just seemed like a joke. When I pulled it back out to look at it, the whole thing just seemed weirdly true, weirdly naive, or probably a little bit of both. So that laugh part just kind of made itself, and it’s really annoying. I think it just might be so jarring, it just forces you to listen to it whether you want to or not.”

The song False Jeopardy hits with a pretty big Pixies vibe, especially for the first half, but Yost says that wasn’t an intentional influence. “I think you spend a lot of your time ripping off bands you love, and hopefully you get to a point where they just become a little part of you. So I think I maybe years ago would have been actively trying to rip off the Pixies because I love them so much, but now I think it’s just a little part of our DNA.”

“(False Jeopardy) was the first or second song that got written for the record. That song’s kind of about blindly hoping everything’s gonna be okay and trying to talk somebody out of leaving. I think it’s a point a lot of people reach in their relationship where you spend most of the time trying to convince the other person they should stay, even though it’s probably not the right decision anymore.”

You can hear a demo of False Jeopardy during the fist two minutes of a movie starring Keanu Reeves called To the Bone, streaming on Netflix right now. “We didn’t even have the album version recorded yet,” says Yost. “But they liked the demo so much they wound up using it in the movie.”

Along with False Jeopardy, Rube was one of the first couple tunes written for the album. “I wasn’t sure how the record was gonna work yet. I started working on it right when I found out my marriage was ending, so I wasn’t sure whether I was gonna try and write about that yet, or just write about anything else but that,” says Yost. “So (Rube) wound up being a hybrid, sort of, about Lee Harvey Oswald, who I was reading about at the time, and this lady falling in love with him. But it still ended up being also about the end of my marriage. But people dancing to a song about Lee Harvey Oswald seemed like a funny proposition to me.”

Pale King  was one of the last songs written for the album. Yost wrote it after watching the four-hour documentary Tom Petty: Runnin’ Down a Dream. “As we were getting close to finishing vocals, Dennis kind of put on his California night scarf and was just like, ‘I want you to get the last two choruses done and we won’t do many vocals tomorrow because you shouldn’t be able to talk very well.’” The song title was borrowed from the unfinished David Foster Wallace novel, which he was writing when he committed suicide. “It’s mostly just about hating what you are,” admits Yost. “I think that’s probably what a lot of these are about.”

Yost says the track Reptile Fund is an example of Dennis Herring’s work method. “We were working really hard on something else one night. Dennis had been gone for a day or two, so we’d been left to our own devices. And Dennis rolled in about 7:00 one night, and we thought he was gonna just pop in and say hey. But he said, ‘let’s stop everything we’re doing and record this really ornate part.’ You can’t really hear it on the choruses of that song, but there’s this countermelody going on with a glockenspiel and a piano and a sped-up guitar line and like two other instruments. That’s just what he felt like doing at that moment. I love it. It’s one of my favorite parts of that song.”

So what was it like to write an entire album about the dissolution of your marriage? Turns out it’s not always the salve we’ve been led to believe.

“When I was writing the songs, I didn’t ever feel better,” admits Yost. “I felt like I just kept churning out all of this horror that seemed to just keep going on and on. I didn’t feel better. It wasn’t cathartic, just tiring. It wasn’t until the record was close to done that I just became grateful those feelings had somewhere else to go.”

The Kickback are currently on tour and possibly coming to your city soon. They’ve been on the road for much of the past few months and will continue for a several weeks more. They recently ended about seven weeks opening shows for ‘90s alt-rock heavyweights Bush (as in Glycerine, Machinehead, Everything Zen) and have recently begun their own tour of headlining dates.